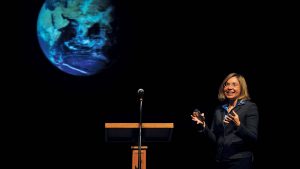 “Facts aren’t something we need to believe to make them true — we treat them as optional at our peril. And if we’re the president of the United States, we do so at the peril of not just ourselves but the hundreds of millions of people we’re responsible for.”

This quote is from Katharine Hayhoe, the director of the Climate Science Center at Texas Tech University, in reaction to a comment from President Trump who, because he truly sees himself as an individual with a high level of intelligence, does not believe that global warming is a pressing issue; nor that it is caused my human intervention.

As reported in a recent article published in the Washington Post, Trump is simply dismissing a landmark report compiled by 13 federal agencies, including NASA, detailing how damage from global warming is intensifying throughout the country. And how urgent it is for the country (and the world) to act on it before it is too late.

We are living in an era where rubbish talks have taking over common sense rationality. Where rationality is too often associated with conspiracy and deep state theories. Too many prominent people are saying all kinds of things to the public and taking them for idiots, simply to promote their own beliefs, and defend their political or personal agendas, whatever stupid these beliefs or how biased these agendas could be. And it is quite obvious when it is time to talk about global warming. This important question should have the unanimous support of the world community, rally all political forces from all sides, as important long term strategic decisions need to be taken worldwide, rapidly. But it is still too often being discussed lightly, almost like it was a mundane topic, where almost everyone now seem to be an expert and able to argue on the pros and cons of this serious matter. With the exception of FOX News, which is obviously bias, the US medias privilege a balance approach in order for people with different points of views to debate their ideas on a fair basis and give viewers a fair perspective. But for global warming it is the wrong approach. Simply because on one side you have a quasi unanimity of the scientific community (as indicated in a recent report from the NASA that states that 97% of scientists consider that global warming is real and caused by human intervention); while on the other side, you will find pundits and communication experts that have nothing tangible to offer other than, for example, showcase the recent wave of arctic weather in one specific region of the globe (most specifically the north-east part of North America) in order to support their baseless narrative, while the rest of the planet is dealing with temperatures that are 2 degrees Celsius higher than normal. These are false equivalencies.

It is quite ironic seeing people celebrating the accomplishments of NASA after it successfully landed a robot on Mars; while not trusting them when it is time to talk about global warming! I know, it sounds crazy, but, personally, I prefer to put my faith in the scientists of the NASA when my future and the future of my family and kids are in play. They probably know better than me.