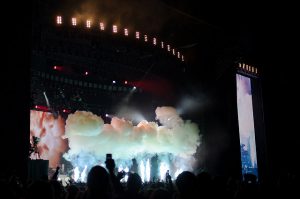 Here is an unreleased version of the Live and and let Die song from Paul McCartney. This is an original recording back from the Wings era. It featured the band only (and the voices); without any additional effects as it was the case for the released version. It is of course  miles away from the full stage effects that is offered by Sir Paul and his band during the current Freshen’up tour. All versions are good but this one, I have to admit, is beautiful. It will be included in a soon to be released re-mastered Wings greatest hits album.