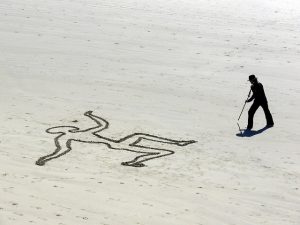 Intellectually, this is a big deal, a real fraud. What? In order to prevent forest fires, the easy fix would be to rake the floors of the forests? Really? After all, this is what they do in Finland, and it works! And maybe this is what we do in Canada too! We better check on that one. That is easy. No need then to start discussing complex issues such as  global warming. No need to make difficult choices. Rake the floors; it is easy! We simply need to purchase millions of rakes, hire thousands of workers and clean the floors of the forests. Awesome! Notwithstanding the fact that this could potentially fix the issue of illegal immigration because, you know, you will need people to rake down the forests; a lot of people. This is a smoking gun, literally:  With the wave of a magic wand, we eliminate forest fires, create thousands and thousands of jobs and fix illegal immigration. It is a simple enough idea, somebody just had to think of it. But we have our man, the Rake Man.

The caveat is that it appears that this raking idea is unfortunately based on false pretenses. Neither the Finns nor the Canadians (I have checked with my sources) are raking the floors of their forests. Which means that the man wearing a hat on this video appears to be saying all kinds of things to the public, taking them for idiots, in pushing the idea that there is always an easy fix to a complex issue. Are we surprised, here?

Under normal circumstances, such simplistic proposal from someone should all make us smile: Life is good and you act nicely with the man; you shake hands, perhaps you offer him your seat in public transit; and then you move on with your life, like if nothing had happened. But the problem here, is that every single word that is coming out for this man’s mouth is amplified by the news medias, the pundits and the social medias. There is no escape to it.

I know this man for more than forty years. He was always talking very loud in order to make sure that he is being heard and that we talk about him. He has always pretended that he is extremely wealthy, without showing any proof of it. He always went on and on saying nothing, even though nobody really care about him. Success for him was making the front pages of the gossip magazines. Today this same man appears to be speaking with authority; but it is simply because he is holding a position of authority. This man has not changed over the years. He is still as superficial, as stupid as before. Please spare me with the idea that there is perhaps a glimmer of intelligence and foresight in him. It is not fair for the rest of us. This man has been a con man for all his life; and he still is. Too bad for those who see him as their mentor; it is unfortunate.

We don’t rake our forests here in #Finland. https://t.co/DTBhWkNZIa

While on the subject. Look at this one, from the same man, wearing a suit and a tie. I do not know what to say. Honestly.