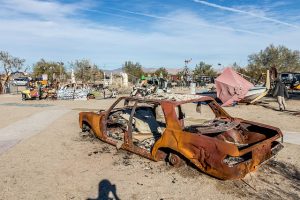 Last March I was writing on my blog that «the Trump movement should be seen as an anarchist movement, whereas political institutions are to be destroyed and replaced by nothingness”. Nine months later, as the presidential campaign is ending in a chaos filled with its load of insults and hateful rants, the anarchist movement is growing and may have reached a point of no return.

Unless something catastrophic happen, Donald Trump will not be president of the United States of America. But his relentlessness in promoting an alternative reality that suggests that the only way he could lose would be for the election to be rigged, is a scary thing. In doing so, Trump is calling upon his followers not to accept the results of the election and delegitimize Clinton’s victory.

The consequences of what may appear to be a call to arms, entail incalculable risks. It would be naïve per say to believe that the angry Trump’s followers, after being ignited by his inflammatory talk over the last few months, after being told over and over that this election is their last chance, will simply be retuning back to their hideout and wait for better days to come. The destructive urge that was brought to the surface by Trump since his arrival in the political arena, is a mere reflection of the profound anger felt by a large portion of the American society vis-à vis the establishment; but it is also filled with bigotry, racism and misogyny. There is a creeping surface fire out there, and the defeat from Trump could be the spark that ignites a large scale conflagration. Trump is acting in an astonishingly irresponsible way by not trying to mitigate the feelings of his followers, whom he refers to as « patriots ». This scorched-earth policy is a call to anarchy and a call for the institutions to be destroyed. And we are entitled to ask for the motives behind that nihilist strategy.

I have no respect for Trump. He is a narcissistic opportunist, sitting on top of a movement that is way larger than him; and an arrogant real estate promoter that appears to be good at using other people’s money for his own benefit, even though we have no real way to know if he is as wealthy as he pretends to be. But Trump is not Machiavelli; and I cannot imagine him developing a plan to destabilize a country that help him grow his business over the years. His nomination as the GOP presidential candidate is the result of a combination of factors: the extraordinary inaptitude and inaction of the other candidates; and the blind pursue by the establishment of the GOP in taking back the White House, whatever the cost would be. I have the feeling that Trump never really planned to win the presidency as he surely knew that this job was way over his intellectual capacities. But, over the months, he got caught in his own game, and even if his candidacy was plagued with shameful indiscipline and incoherence, he starts to believe that he could be on the good side of history; that, in considering his binary winner/loser alternative reality, he could indeed be the winner of something. So, one day, Trump called for a wolf to lead his herd of dogs; and asked Stephen Bannon to be the general manager of his campaign. Bannon, who was the CEO of Breitbart News until that nomination is a peculiar individual. Closer to Machiavelli than to Trump in reality. And this might help us to shed some light on the rationale behind the nihilist strategy of the Trump campaign.

I suggest that you look carefully into the interview that Bannon gave in 2014 to Ronald Radosh, which was published on the Daily Beast website in August 2016. “I’m a Leninist,” Bannon proudly proclaimed. “Lenin wanted to destroy the state, and that’s my goal too. I want to bring everything crashing down, and destroy all of today’s establishment.”

Radosh added: “Trump’s behavior thus far has been compatible with Bannon’s belief in Leninist tactics. As the Bolshevik leader once said, “The art of any propagandist and agitator consists in his ability to find the best means of influencing any given audience, by presenting a definite truth, in such a way as to make it most convincing, most easy to digest, most graphic, and most strongly impressive.”

Stephen Bannon has recently indicated that he does not recall having spoken with Ronald Radosh. That said, these nihilist thoughts are in line with what is currently occurring in the Trump campaign. They are also in line with what we read on a daily basis on alt-right news websites such as Breibart, Drudge Reports and Infowars, which are followed by millions of Americans, while being the sole source of information for the vast majority of them.

What about Trump? Trump has won something important. He will be remembered until the end of time, whatever the results of the election. And once the election is over, he will be able to count on a solid base of hardcore followers who will be more than happy to continue bashing on Muslims, immigrants, Latinos, African –American and all those, form the right or the left, that still believe in the democratic institutions. For all the Breitbart’s of this world, it will soon be cash-in time; big time. And the Trump organization is well positioned to take advantage of this highly profitable market. Believe me.