Trump is a stick of dynamite 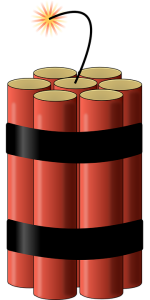 Donald Trump is a stick of dynamite that was planted right at the heart of the political system by a large segment of the US population, mainly whites and Christians, who openly refuse to fulfill their duties as citizens. Win or lose, the damage is done; and the stick of dynamite can only explode.

It is truly distressing to hear Trump’s followers explaining why they are supporting him: « Trump tells it like it is, no matter what; he is telling us truthful things, something that we haven’t heard from any other politicians before; Trump is a true patriot that is speaking from his heart; he is one of us; Trump is a successful businessman and will help make America great again. » Really? You have to be kidding me! It is so naive that one should cry in listening to that.

Being so naive though, could be extremely dangerous. The idea of giving the keys of the kingdom to this adventurer, Trump, a demagogue, who neither has a specific plan, nor a political program, who is clueless about geopolitics, clueless also about handling public funds and policies, is such a recklessness act that it makes me wonder: Either the people are stupid, which I doubt; or this is a deliberate action aimed at punishing the political class for having a black president in the White House during the last seven years. It might be tempting for some purists to associate this kind of action to democracy; to see it as the will of « we the people » deciding the fate of whomever shall govern them; but I do not believe that either. If the only thing that matters is to make America great again, no matter what the price tag is politically, and regardless whether they know the specifics for making that flagship project a reality or not, it simply means that people do not care on how Trump will be governing. ”We the People” are abandoning their governing duties and surrender powers to a third party. This has nothing to do with democracy, nothing to do with the idealism of Lincoln, who had defined democracy as the “government of the people, by the people, for the people”. In my view, the Trump movement should thus be seen as an anarchist movement, whereas political institutions are to be destroyed and replaced by nothingness.

The Republican Party, as well as the whole political class in the US, are dealing with a substantial problem that appears to be unsolvable. It is difficult to imagine that the people that are following Trump will be able to rally behind another candidate, if Trump loses the nomination (unlikely). In the same fashion, it is also hard to imagine that if Trumps wins the presidency, that those who have not voted for him, Republicans or Democrats, will accept the defeat stoically and rally quietly behind someone who carried out a scorched-earth policy in order to achieve his personal ambitions. America is trapped because Trump is playing with powerful demons such as racism and bigotry, things that have nothing in common with republican values, but are now being displayed publicly. Trump, on the other end, is stuck in a forward motion because his movement is now larger than him. He has no choice but to stay on track with his diabolically logical plan.

There is a stick of dynamite at the heart of the political system in the US. And this stick of dynamite is about to explode. We all have to be very concerned by this. Especially in a country with an army of people loaded with guns and ammunitions.