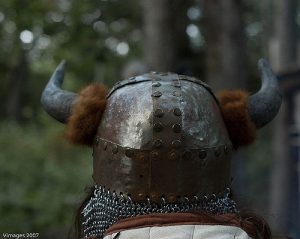 Billy Bob is scared. Phoenix is scared. White America is scared. So scared of ghosts and everything else; but especially scared of the Syrians refugees that have invaded Europe over the last few months and might cross the Atlantic Ocean by waves of tens of thousands, vandalizing homes, raping women and kids, shattering the American dream and imposing the Sharia law to all citizens. Nothing less than that.

Like many others, Billy Bob deeply believes that the so-called refugees are nothing but an army of invaders that is about to storm the United States the same way the Visigoths stormed Rome back in the first century, provoking the fall of the empire. Obvious facts are pushed aside and do not matter anymore: neither the obvious despair of these people, nor the drownings, the decimated families, the broken dreams of those fleeing by thousands the war zones of Syria, Libya and Iraq. Sitting by his pool in Phoenix Billy Bob has a very simple explanation: History repeats itself, the vandals are coming, and the empire is facing a serious threat. Period.

This is why he is fuming throughout social medias, denouncing his president, calls others to arms, while referring non-stop to his constitutional rights. He salutes when one suggests to ban Muslims for entering his country, because Islam is evil. He cheers when one promises to build a wall on the border south of his state, as it is the best way to prevent rapists, drug dealers and job stealers to come into his country. He applauds when he is being told that his civil liberties are in jeopardy because there is a tyrant holding power in his country. He raises his fist when he is being told that his country will soon be part of the third world because it is as much indebted as he is. That Billy Bob that has commented on my tweet lately is in complete denial. He is living in a world of delusions; like the others who applauded cheerfully to his comments. His case is not unique, and this is why it is a bit unsettling: there are tens of thousands like him spewing hate in social medias and acting as bigots.

These bigots are not dreaming about a better world. Their only hope is to be able to go back in time and relive an era where the sovereign white Christian America is talking strong and ruling firmly over the rest of the world, disregarding the rights of others. The problem is the era that they are dreaming of, that era never really existed. It may have been used as a background for a John Wayne movie; but I am not even sure of that.

No, history does not repeat itself, Billy Bob. History never repeats itself; it pushes itself forward. It is not because we are not able to understand complex issues that we have to necessarily simplify things. Over time people do change, so are the issues and the priorities. Borders change too. Progresses in technology, science and medicine are pushing forward the boundaries of knowledge. Human beings learn not to repeat the same mistakes. They put in place mechanisms that protect and help them doing just that. And this one of the reasons, rightly so, that governments do exist. Otherwise, this would leave the door wide open to barbarism.

These refugees that scared you so much, Billy Bob, are in fact people fleeing barbarism imposed upon them by other people that refuse to move forward and have elected living in the past. Refugees are fleeing bigotry, racism and oppression. They are not perfect, do speak another language, and most probably practise another religion. But they need your help in fulfilling their dreams of a better future. It is not the first time in history, and will not be the last either. And in the past America has always been there to help them.